The Leading Edge of Traffic Surveillance

The GTS 8000 brings new levels of safety to aircraft by not only providing a crystal-clear picture of potential traffic threats, but also by issuing maneuver commands that direct pilots on how to best clear these conflicts. As a Change 7.1 compliant solution, the GTS 8000 meets the standardization requirements that will be implemented in most countries as early as 2014.

Gain an Extra Set of Eyes

When the GTS 8000 receives replies to its interrogations, it calculates the target’s range, bearing, relative altitude and closure rate. It uses additional data received from any ADS-B “Out” equipped targets and then plots each target’s location, predicts potential traffic conflicts and depicts the information on the flight display. Course trend vectors and vertical climb or descent information can also be shown on compatible displays. In addition, the GTS 8000 also issues audio alerts. For example, you might hear, “Traffic, Traffic” through your headset.

Get Guidance Away from Threats

If the GTS 8000 should detect an immediate conflict, it will issue an alert known as a Resolution Advisory (RA). An RA involves both visual and aural instructions on how to avoid a collision, such as a change in vertical speed. As soon you hear “Climb, Climb” or “Descend, Descend” in your headset, you know a potential conflict has been detected and already know exactly what step to take to avoid it.

The GTS 8000 will also coordinate RA maneuvers if a conflict is with another TCAS II equipped aircraft. For example, it may instruct you to climb while it instructs another pilot to descend. 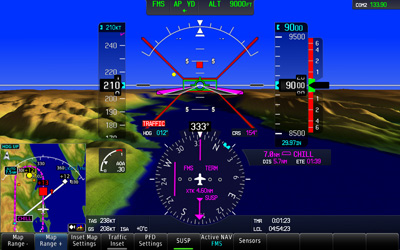 Augmenting reports from radar-based air traffic control, the GTS 8000 is able to use a synthesis of both active and ADS-B passive surveillance technology to correlate target data and pinpoint traffic threats. Included is our patented CLEAR CAS technology that provides real-time information that is independent of radar-based air traffic control. It combines all available surveillance, including data from a Mode S transponder with Extended Squitter technology (such as the GTX 3000). The GTS 8000, alongside the GTX 3000 and a radar altimeter such as the GRA 5500, forms a complete TCAS II/ACAS II compliant system. In the future, the system will also provide enhanced target information, including flight ID, altitude, velocity and direction on compatible displays. Software upgrades will also be incorporated to add Airborne Separation Assurance System (ASAS) applications such as Surface Area Movement Management (SAMM), Merging and Spacing, CDTI Assisted Visual Separation (CAVS) and more.